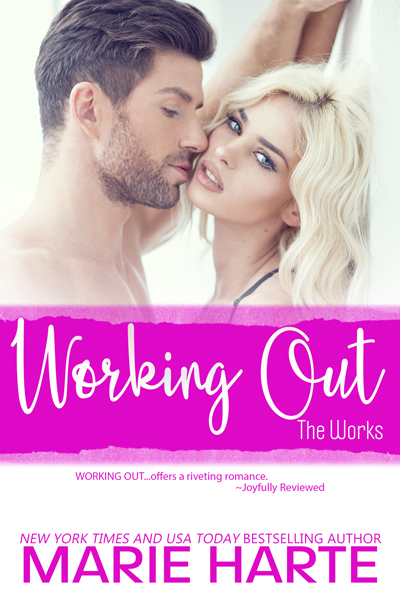 A woman with a history of picking Mr. Wrong.

A man with a powerful kink for control.

When lust turns to love, who’s really on top?

A woman with a history of picking Mr. Wrong.
Maggie Doran is off men, having gone through a string of disappointing relationships. Then like clockwork, her libido fires up over her new boss–the epitome of bad choices. The man is built like a Greek god, sexy, and has a harem of eager gym groupies willing to give him anything he wants at the drop of a hat. Yet one more Mr. Wrong to add to her list.

A man with a powerful kink for control.
Mac Jameson fell in immediate lust with his newest employee the moment he laid eyes on her.  Four months later, he’s still stuck in no-man’s land. Maggie ignores him when she’s not glaring holes through him. The woman doesn’t understand he’s in charge. Unfortunately for Mac, no other woman will do. But he’s afraid if he does get Maggie in his clutches, she’ll bolt when she realizes he’s got a powerful kink for control.

When lust turns to love, who’s really on top?
Except she doesn’t bolt. She wants more. But just as Mac realizes Maggie is the woman he wants forever, she gets a shot at fulfilling a lifelong dream that might take her far away. Will she leave him when he’s just found her? And how could he ever think she’d love a guy like him? Mac only knows he’s not giving up without a fight. He’ll command and conquer her–body, heart and soul.

He pulled back to look at her, and damn him, but his eyes looked impossibly blue. “Don’t tell me you listen to the rumors at the gym?”

She blushed but didn’t turn away. “I can’t help it. Jameson’s Gym is like its own tiny universe. It’s hard not to hear that the great stud at the gym has slept with just about all the female members.”

Instead of being put in his place, Mac grinned. “Not Mrs. Hicks. I mean, I could have had her, but I didn’t want to piss off my uncle.”

Maggie couldn’t help her laugh. “Better not let him hear you say that. He’s way too young for her. Ida Hicks is ninety years old. Okay, so she’s the one woman you haven’t had sex with.”

“Please. There are a ton of women I’ve never been with.” He paused. “There’s you.”

A quiet settled between them, one that made her nervous…and aroused. The man got to her on every level. It just figured she’d been thinking about him all day and her traitor of a best friend had let him into her house.

“Right. There’s me.” She cleared her throat and tried to move away, but he wouldn’t let her. “Um, Mac? Let me go.”

“Since you said my name, okay.” He released her and stepped back looking smug.

This Mac Jameson she knew too well. “I say your name all the time.”

“When you’re not calling me a jerk, a dictator, or an asshole, you usually call me Jameson.” He crossed those incredible arms over his massive chest.

She refrained from fanning herself and planted her hands on her hips, wanting to appear strong, not swoony from the sight of his incredible body. “You are a jerk, a dictator and an asshole. Sometimes.”

“You’re just as bossy. You’re just prettier about it.” He grinned, and the flash of that smile melted her resolve to keep her distance. “For the record, I think I slept with maybe three women who work out at the gym, and the last one was months ago. Not my fault they have big mouths.”

A surge of jealousy struck her mute. Totally not how she wanted to feel about her boss. She cleared her throat. “Right. Let’s get back on track.”

“Shelby let you into my apartment. You want to have sex with me, and you want to talk.”

That surprised her. “Why? If I agree to take off my clothes and let you screw me right now, will that end your pursuit? I mean, we both know what you really want, right?”

He blinked as he digested her words, and she had the satisfaction of knowing she’d thrown him for a loop.

In a low growl, he asked, “So you’d fuck me right here, right now, to get me off your case?”

“Sure. Why not?” God, she would. She really would. She’d been dancing around her attraction for four long months. She trusted Mac, well, not as a boyfriend, but as a man who would never force her or physically hurt her.

Not unless she wanted him to.

And there went another pair of panties.

“Damn.” He scrubbed his hair and took a surprising step back. “Tell you what. Go get comfortable and we’ll have that talk.”

Not what she’d expected to hear. “Excuse me?”

His familiar arrogance returned. “Did I stutter? Go put your hot little ass in comfortable clothes and get back here.”

She wished his bossiness didn’t arouse her so much. She grumbled as she walked away. “I’ll change because I want to change, not because you’re telling me what to do. It’s my freakin’ house.”

She heard him mutter something about annoying women but had a hard time getting over the fact that he liked the way she looked. He always called her hot or pretty or beautiful, words she’d been hearing her entire life. But when he said it, she actually believed it.

She returned moments later in clean panties, her favorite flannel pants, her comfy bra, a sweatshirt, and her fuzzy socks. Her relaxing and totally unappealing clothes. A pitiful defense, but if she felt unattractive, she prayed she could stop herself from jumping the man.

Maggie didn’t want to be another notch on his bedpost. And right now, aroused and excited, she feared she’d look without leaping. The notion of having an orgasm with Mac—no longer Jameson—had indeed become an obsession.

“Well? I’m here. Talk.” She glared at Mac sitting on her loveseat. He’d started a fire, and the place looked way too cozy not to get closer.

He patted the spot next to him. “Sit by me.”

She snorted. “My house. My rules.” She deliberately took a seat in the chair opposite the loveseat.

He sighed, rose to his formidable height, and crossed the room to loom over her.

“Did I stutter?” she mocked, repeating him from earlier.

He lifted her into his arms in one felled swoop.

“You weigh a lot more than you look.” He laughed at her, then sat with her on the loveseat before dumping her next to him.

When she scrambled to back away and off the loveseat, he took her foot in his hand. “Uh-uh. Sit. Stay.”

“You know, you saying that just makes me want to collar you.”

She froze. Collar? Had he looked through her private journals?

“I was just kidding, Maggie.” Mac chuckled. “I can just imagine a collar and leash on you. Kinky, but I doubt you’d go for that.” He winked at her.

If the man only knew how often she’d imagined being dominated.

“Look, I just want to talk,” he continued.

He squeezed her foot, and to her surprise, it felt good. “Do that again.”

“If I rub your feet, will you shut up and listen?”

She moaned when he started massaging her arches. “Man, that’s good. Okay, you can talk.”

He coughed and shifted under her. “Much as I look forward to you making those sounds when I’m inside you, I kind of wanted to say something first.”

She jerked her foot back. “What?”

He pulled it back. Then he rubbed her toes and she forgot to be angry.

“Keep rubbing my feet and I’ll call you whatever you like.”

He chuckled. “Good to know.” He soothed her tired pads and hit her heels hard. The man was a wonder. “Look. This is awkward. You work for me. Only because you want to, I know. We’ve known each other for months. Your best friend is dating my best friend, and you’re probably freaked out that if you fall in love with me, you’ll make things awkward when we get together for parties and shit.”

“I want you. You want me. We’re two attractive people. Why shouldn’t we hit it?”

She wanted to laugh. This was the Mac she knew. Honest. Sometimes to a fault. It made her feel better that he didn’t try to soften her up or seduce her with lies. “Everything you said makes sense. If we did go out and it turned sour, maybe because you fell in love with me, and I left your sorry ass behind, it would make it tough to hang out with Shane and Shelby. Though we don’t do that much with them together as it is.”

“Only because you go out of your way to avoid me.”

“I don’t know. You never talk to me. Tell me about your art stuff.”

She took a hard look at him. He seemed so earnest. “Why?”

“Because I’d like to know more than that I’m fucking the hot blond from the gym. I want a date, Maggie. Wherever we go from there will be up to you.”

Astonished, she sat up straighter. “Hold on. You think you can get me into bed after one date?”

He grinned. “Honey, I could have your ankles on my shoulders in about three seconds if I tried. Let’s not embarrass you. I’m a sexy guy. I know it, you know it. I’m trying to be a gentleman.”

“You aren’t serious?” She drew her foot back, aware he let her. “Think pretty highly of yourself, don’t you?” Yet that was part of his charm. Mac was handsome; he knew it. He treated all women with politeness and charm. And those lucky few who received his special attention had nothing but good things to say about him.

“Think?” Mac snorted. “I know I’m damn good. Let me show you what you’ve been missing.”

And then the conceited hunk did what she’d been dreaming about for months.