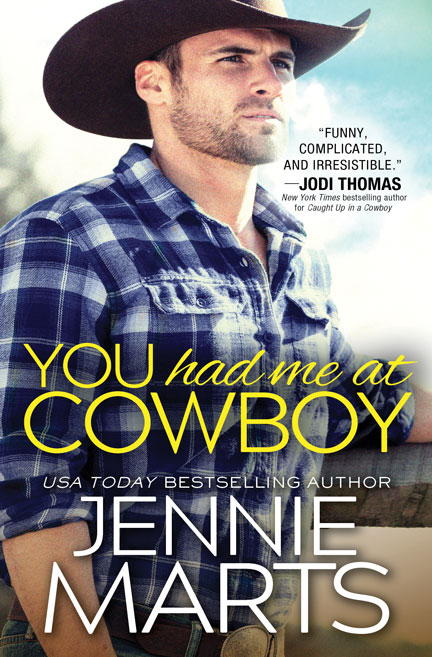 In Jennie Marts’ YOU HAD ME AT COWBOY, Mason James is the responsible one who stayed behind to run the ranch while his brother, Rock, took off to play professional hockey. Women have used him before to get to his brother—and Mason intends never to get burned again. But after he meets quirky Tessa Kane at his brother’s wedding, Mason discovers he’s ready to take a chance on love. This cowboy is falling hard.

Mason James is the responsible one who stayed behind to run the ranch while his brother, Rock, took off to play professional hockey. Women have used him before to get to his brother—and Mason intends never to get burned again. But after he meets quirky Tessa Kane at his brother’s wedding, Mason discovers he’s ready to take a chance on love.

Tessa Kane is a reporter on the verge of losing a job she desperately needs—unless she’s clever enough to snag a story on the famous Rockford James. But when she falls for her subject’s brother, she’s caught between a rock and a hard-muscled cowboy. What will happen when Mason finds out who she really is?

He wasn’t kidding. There was meat—and beef, as in beefcake—everywhere she turned. Tess didn’t think she’d ever been in a room full of so many beautiful people. Yet she couldn’t seem to take her eyes off the cowboy who was piling ribs onto a plate for her.

She was suddenly aware of how many of those beautiful people were also thin and fit, and if she weren’t starving, she’d probably be a little more conscious of her own full curves. But at the moment, she couldn’t care less. Her mouth watered as Mason dumped a scoop of creamy macaroni and cheese next to the ribs.

“This is supposed to be my mom’s recipe. She gave it to the caterers, and they did their best. It’s not quite as good as hers, but it’ll do in a pinch.”

Somebody needs to pinch me, Tess thought as he led her toward a table. She couldn’t believe she’d just walked through a buffet line behind one of her favorite celebrities.

Mason got her settled at a table and signaled for one of the caterers to bring them some drinks. “What are you drinking? Tea? Soda? Wine? It’s an open bar, so get whatever you feel like.”

“What are you getting?” she asked as she lifted a rib and tore off a bite. A moan escaped her lips. “Oh my gosh. These ribs are amazing.”

He chuckled. “I think I’ll get a beer. They’ve got one from a local brewery called Creedence Clearwater, and it’s pretty good.”

“That does sound good. I’ll have one too.”

His eyes widened, then a grin covered his face and his voice fell into a deep, low tone, reminding her of a biscuit dipped in thick, rich honey. “Damn, girl, I haven’t even known you thirty minutes, and I think you’ve already won my heart. You drink beer, eat barbecue like a truck driver, and I’ve already seen you in your bra. I might have just fallen in love.”

Tessa let loose a burst of laughter, but her stomach had dropped at the sound of his words spoken in a slow, sexy drawl.

She’d better be careful, or she might just fall in love herself.

Whoa. Down, girl. Nobody was falling in love with anyone.

She’d already fallen—into a mess of trouble—and the only way she was going to get herself, and her grandmother, out of it was to forget about the distraction of the cute cowboy and stay focused on the task at hand.

But the task at hand was heading toward the dessert table, and it looked like it would be a while before she’d get a chance to talk to Rock, so she might as well enjoy the food—and the company—while she waited.

Mason took his hat off and set it in the center of the table. It was a small gesture of manners but told her a lot about the kind of man Mason James was.

His hat was black—she couldn’t help but wonder at the significance of that detail—but it was also high quality and looked expensive. Obviously, a good hat and not one he donned to work in. A slight hat ring circled his head, a barely noticeable crease in his dark hair, and a shock of his bangs fell across his forehead, giving him an even more rakish look.

The temperature of the room had just increased a notch, or maybe it was just the heat building in her chest as she tried not to squirm in her chair, with her hands clasped tightly in her lap to keep from reaching up and brushing his hair from his forehead.

A petite blond waitress sauntered up to their table and offered Mason two bottles of beer and a suggestive smile.

Grabbing a napkin, Tess wiped the barbecue sauce from her mouth, noting that the perky blond’s shirt fit just fine over her chest.

Perky, petite blonds were so lucky. Tess had always felt like an Amazon around them—and not in warrior princess way, but in a clumsy, too-tall, size-ten clodhopper-shoes way.

Although the heels she wore today were far from clodhoppers. The cute burgundy pumps had cost more than she usually doled out for a pair of shoes, but they’d seemed worth it at the time. But that was before. Before she’d stopped attending parties and before her grandmother had started chatting online with a Nigerian prince.

Still, no matter how much her shoes cost or how shiny their finish was, Tess still felt gawky and self-conscious sitting in front of a plate full of half-devoured ribs while the waitress swung her tiny hips and cute ponytail at Mason.

He didn’t seem to notice as he took the beers, offered her a polite smile, and turned his attention back to Tess.

Score one for the Amazon.

She took one of the bottles and held it up. “What should we drink to?”

He reached his hand toward her face, and she sucked in her breath as he slowly swiped his thumb across her chin. A dab of barbecue sauce garnished its tip, and he sucked it between his lips. Lord, he had amazing lips.

She couldn’t breathe as she watched him lick the tip of his thumb, and she was fairly certain one of her eggs had just dropped.

Swallowing at the dryness in her mouth, she tried to keep from melting right into her chair.

He tipped his bottle toward hers and offered her a cocky grin. “To good barbecue, cold beer, and…”

He hesitated, and she raised an eyebrow as she waited for him to say lacy bras.

Instead, he winked and said, “…and new friends.”

She let out a chuckle and relaxed her shoulders. She liked this guy. Clinking her bottle against his, she repeated, “…to new friends.”

Jennie Marts is the USA Today bestselling author of award-winning books filled with love, laughter, and always a happily ever after. She is living her own happily ever after with her husband, two dogs, and a parakeet that loves to tweet to the oldies, in the mountains of Colorado.