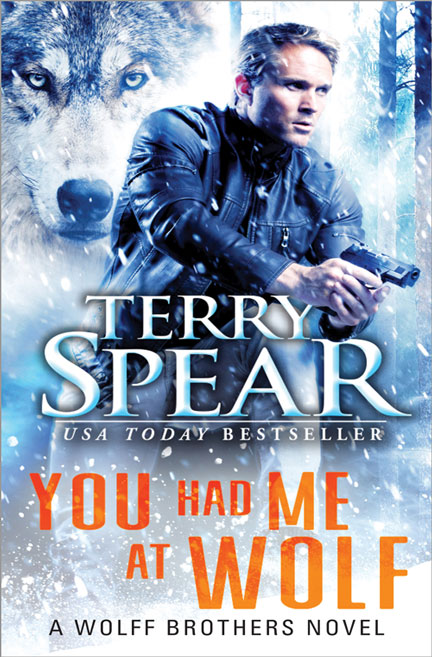 The hot, powerful Wolff brothers have moved to the outskirts of Silver Town and opened a ski lodge. They’ve always wanted to live in a wolf-controlled area, and now they have their chance. They’re settling in for a quiet winter, when their lives suddenly become way more exciting than they’d ever planned.

Private Investigator and gray wolf shifter Josie Grayson is hot on the trail of a dangerous criminal hiding out at the ski lodge when her partner takes ill and must leave her to pursue the mission alone. Blake Wolff steps in—he can’t resist the allure of this brilliant and focused she-wolf whose presence awakens a long dormant yearning in his heart. The hot, powerful Wolff brothers have moved to the outskirts of Silver Town and opened a ski lodge. They’ve always wanted to live in a wolf-controlled area, and now they have their chance. They’re settling in for a quiet winter, when their lives suddenly become way more exciting than they’d ever planned.

Private Investigator and gray wolf shifter Josie Grayson is hot on the trail of a dangerous criminal hiding out at the ski lodge when her partner takes ill and must leave her to pursue the mission alone. Blake Wolff steps in—he can’t resist the allure of this brilliant and focused she-wolf whose presence awakens a long dormant yearning in his heart.

As pursuit of their quarry heats up, Blake has a mission of his own…to convince Josie that there’s more to life than work…and that she’s his perfect mate.

“Looks like I’ve got some business to take care of.” Landon frowned, his gaze focused on someone behind Blake who he could hear was fast approaching. From the sound of the ski boots on the tile floor, he thought the person was female. “You go ski, and when you’re done, I’ll take a few runs down the slope.”

Blake glanced back and saw the pretty blond he’d noticed observing him and Rosco during the avalanche training. She was headed straight for them, her expression intense, brows furrowed, her gaze shifting from Landon to Blake. He smelled a whiff of her scent—fresh air and she-wolf. No wonder his brother was eager to assist her. At the same time, Blake was a little embarrassed that the woman approaching had witnessed him struggling with the snowblower. Good thing she hadn’t seen him with an out-of-control Saint Bernard even earlier.

Blake smiled. “I can hang around for a moment and take care of whatever issues she’s having.”

Blake knew that wasn’t the only reason his brother wanted to take care of the woman’s concerns. Landon had recognized she was a wolf too.

When she drew closer to them, she targeted Blake, and he was eager to be the one to handle whatever was upsetting her. Happily. Conflict didn’t bother him or his brother. It was a chance to prove they could resolve any issues that arose at the lodge with the least amount of fuss. When he caught another whiff of her wolfish scent, that made him even more eager to help her. Though he reminded himself she could have a mate or a potential one.

She smiled brightly at Blake, her cheeks and the tip of her nose rosy from the cold. She was wearing a white parka, the furry hood down, a light-pink and white ski hat, dickey, and gloves, and formfitting light-pink ski pants and white ski boots, looking as if she’d just came off the slopes. She reminded him of cotton candy and snow bunnies, innocent and sweet.

When she reached him, she threw her arms around Blake in a hug, startling him. He smiled down at her, amused at where this was going. Since he was single, he didn’t have to worry about a mate throwing a fit. If he had, all she’d have to do was smell this woman all over him, and he would have been in the doghouse. As long as the woman hugging him didn’t have a mate either. Then again, wolves mated for life, so she probably wouldn’t act this way if she were mated or courting another wolf. She could smell that he didn’t have a she-wolf’s scent on him either. Not until now.

He was surprised at her action. Did she think he was someone else? But she would recognize his scent, which quashed that theory. The only other thought that flashed through his mind was that she was trying to pretend she had a relationship with him because some guy was hassling her. Whatever the reason, he was all too willing to play along and take care of whoever was giving her trouble.

She kissed him, startling him even more, and his brother laughed. “It appears your day is looking up, and I think you have a handle on this.” Still chuckling, Landon walked off.

Blake was enraptured with the woman. Her lips were soft and malleable as she pressed them gently against his, but she began building up the steam, licking his mouth and then nipping and melding hers with his.

Relishing the scent of the she-wolf and the crisp, cold out-of-doors that she carried with her, Blake wrapped his arms around her waist and pulled her tighter against his body, enjoying her soft curves and warmth, building a slow fire deep inside him. They were kissing like they needed a room, he realized, not family fare in the lobby of their lodge. He very reluctantly pulled his mouth from hers and smiled. “Do I know you?”

“Took you long enough to ask.” She smiled up at him, and he wondered what he was getting himself into.

Hell, he was game.

“I’m Nicole Grayson, and you’re my fiancé. For the moment. My life depends on it.”

Blake frowned, worrying she was really in trouble, though she didn’t seem overly anxious—not in her facial expression, and certainly not in the way she’d been so easily intimate with him. “Do we need to call the sheriff?” He should have already had his phone out, but he didn’t want to let go of her if there wasn’t any need. This was just too damn nice.

He wanted to laugh at her choice of words since Landon had said the same thing about Blake. “All right, good show. By the way, I’m Blake Wolff.”

He smiled. He liked her easy banter and didn’t think she could be in any real danger. He would have smelled her anxiety for one thing, instead of her enticing arousal that was fueling his own. “I’d shake your hand, but I think we’re beyond that.”

“For this to be believable, yes.” She smiled up at him as if she truly adored him. “I saw all the trouble you were having with the snowblower earlier.”

“Uh, yeah.” That kind of blew his macho image, he was afraid. He had hoped she wouldn’t bring it up. “I’ve never used that kind before.”

“I kind of figured that. I haven’t either, or I would have tried to help.”

He smiled. “You watched instead.”

Her cheeks pinkened. “You were entertaining.”

USA Today bestselling author Terry Spear has written over forty paranormal romances. Heart of the Wolf was named a Publishers Weekly Best Book of the Year and Billionaire in Wolf’s Clothing was a Romantic Times Top Pick. A retired officer of the U.S. Army Reserves, Terry also creates award-winning teddy bears. She lives in Spring, Texas.