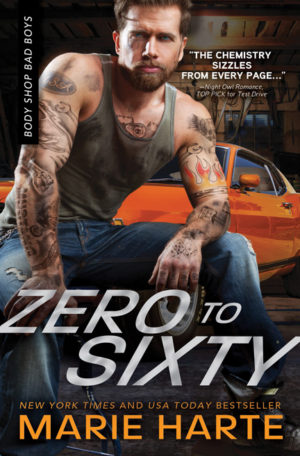 In Marie Harte’s ZERO TO SIXTY, after her last disaster of a relationship, Ivy Stephens is content being single. She has her job, her apartment—and the cute little puppy she’s seen hanging around. When he escapes, she finds her search efforts aided by a big, burly, devastatingly handsome man. One who claims a prior claim on her dog… To win print copies* of TEST DRIVE and ROADSIDE ASSISTANCE, comment on this post. What’s your preference? Cats? Dogs? No pets?  *US only ZERO TO SIXTY by Marie Harte

After her last disaster of a relationship, Ivy Stephens is content being single. She has her job, her apartment—and the cute little puppy she’s seen hanging around. When he escapes, she finds her search efforts aided by a big, burly, devastatingly handsome man. One who claims a prior claim on her dog…

Sam Hamilton is at loose ends since his best friend fell in love. He finds a sense of purpose in rescuing strays. The puppy who’s stolen his heart just happens to run into blond, beautiful Ivy. And Sam can’t help hoping she’ll take in one more stray—him—for good.

She read him so well. For all that they’d pretty much recently met, he knew her too. Weird, and not a little troubling. He didn’t mind her knowing surface details, but it would kill him if she ever learned the bad stuff, the Louise stuff.

“You do nothing.” She nudged him toward her dining table, now a full oval because she’d flipped the leaves up. “Your job is to drink beer and talk to me.”

“Good.” She darted a look at him, then turned back to the lettuce. She wore jeans and a soft looking sweatshirt that slid off her shoulder time and again. Her hair had been tied up in a loose ponytail, wisps of bangs and a few strays kissing her face and neck, the way he wanted to.

Barking took his attention for a second, and he stared down at Cookie, gripping a pig ear in his mouth. “You’re welcome,” he said to the dog, who wagged his tail so hard Sam feared the dog’s butt would fall off. “I think he likes it.”

“You’re spoiling him.” But she smiled. “You’ll make a good dad someday, but you’re going to have to watch it or your kids will be monsters.”

She had the right of it in one. “Yeah.” He cleared his throat. “So there’s something I think I need to say.”

She slowed down her lettuce ripping. “What’s that, Sam?”

“I’m not a good guy for playing games.”

She frowned. “I wasn’t playing any.”

“No, not you. Me. Hell. I’m not saying this right.” He sounded like an idiot, and she looked confused. But he’d been practicing, needing to voice his concerns. “I just…after last night, I can’t think about your hands without getting hard.”

“Yeah, oh. I’ve been happier than shit all damn day.”

A softer “oh,” this one with a smile.

“But I need you to know that I’m not just here for sex. I mean, I wouldn’t say no, but you have to understand we’ll only do something if you want to. I would never force you to do anything.”

His heart felt so damn full when she gave him that look. That trust. “Good.” He coughed to clear his throat. “I wanted you to know that I like talking to you. Being with you. We don’t have to do anything for me to be happy.” So freakin’ weird he meant that.