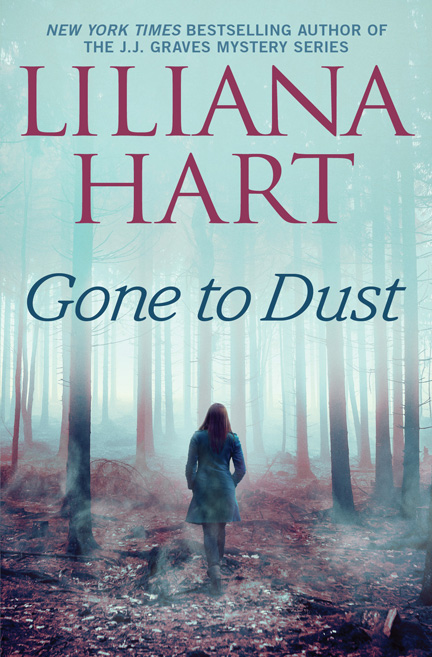 Book 2 in The Gravediggers Series

Praise for Gone to Dust, Book 2:

“Lucky fans of the super-talented Hart don’t have to wait long for the second installment of her new romantic suspense series Gravediggers, as the installments are being released back to back. In the first book, Hart set up her world where five men, declared dead to the world at large, work for a super-secret anti-terrorism force. Hart’s new heroine is a very talented romance writer who takes no crap from anyone — even secret commandos. Miller and Elias are both funny and sexy together, which helps make this book nonstop entertainment, with plenty of witty bantering and thrilling adventure!”

Praise for The Darkest Corner, Book 1:

“Gritty, deadly, and peppered with unexpected humor, this supersexy, adrenaline-charged story will keep readers on edge and breathless until the last page.”

“Liliana Hart sets up a fascinating and intriguing premise of individual men forced into taking extreme steps. Her heroine’s reluctant immersion into this world allows readers to discover the treachery and danger looming all around…a thrilling series!”

“A cool blend of entertaining antics and suspenseful moments, with a slightly morbid sense of humor thrown in for good measure. (Our heroine was a mortician, after all!) I had a blast getting to know this cast of characters and can’t wait to see what exciting things Liliana Hart has in store for us next.”

The Gravediggers aren’t exactly what they seem. They’re the most elite of the world’s fighting forces—and all they have in common is that they’ve been betrayed by the countries they’ve died for. Because they are dead. To their country, their military, and their families. Sometimes the dead do rise…

Miller Darling is one of the most popular romance novelists of her time. Not bad for a woman who doesn’t believe in romance. She’s as logical as they come, and she doesn’t believe in happily-ever-afters. What she does believe in is family, so when her brother disappears, she doesn’t think twice about packing her bag and her laptop and heading out to find him.

Elias Cole lived and breathed the live of a Navy SEAL. Now he’s “dead” and his hero’s honor tarnished. The only thing keeping him sane are the men who are like him—The Gravediggers—and the woman who makes his head spin. He’s never met anyone like Miller Darling. Her smart mouth and quick wit keep him on his toes, and damned if he doesn’t find that appealing.

When Miller receives a package from the brother who abandoned her asking for help, it’s clear she’s in over her head with the mess he’s gotten himself into. She needs a professional, and Elias is just the man for the job. Only her brother is a former SEAL—the man who left his team to die—and Elias is more interested in vengeance than saving his life.

For the Gravedigger Giveaway, we are giving away one review copy of Book 1, The Darkest Corner! Be sure to check out all participating sites on the blog tour for more Gravedigger Giveaways. And note that RT will giveaway three bundles of Book 1 and Book 2, with the drawing to be held Monday, July 10th. Please note, you can only win one giveaway and must have a U.S. address.

For the Love of Books and Alcohol

Three Boys and an Old Lady

Ramblings from a Chaotic Mind

Once Upon An Alpha

WTF Are You Reading

Pick of the Literate

Dew on the Kudzu

Read for Your Future Liliana Hart is a New York Times, USA Today, and Publishers Weekly bestselling author of more than forty titles, including the Addison Holmes Whiskey and J.J. Graves Mystery series. Since self-publishing in June 2011, Liliana has sold more than four million ebooks. She’s hit the #1 spot on lists all over the world, and all three of her series have appeared on the New York Times bestseller list. Liliana is a sought-after speaker who’s given keynote speeches and self-publishing workshops to standing-room-only crowds from CA to NYC to London. Visit LilianaHart.com, facebook.com/lilianahartauthor, twitter.com/Liliana_Hart.

3 Responses to Gone to Dust by Liliana Hart