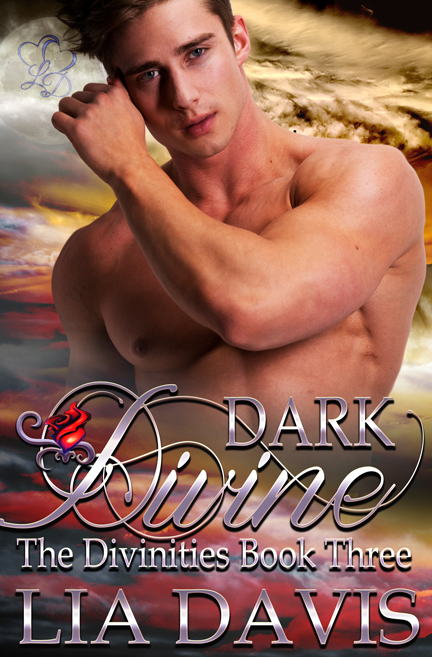 New mother and Divinity, Lydia Rayners, is no stranger to heartache and loss. Her father, husband, and brother were taken from her by the demons, and now they want her son. Lydia will never let that happen, and she is determined to bring them down one by one—by herself if necessary. Her plans are going well until a certain sexy deputy discovers that she’s the rumored demon slayer and is hell-bent on stopping her.

His darkest secret is revealed while her greatest fear comes to life.

Out Nov 9th – the third book in the Urban Fantasy Paranormal Romance series, The Divinities.

Follow the tour and enter to #win a $50 Amazon Gift Card! His darkest secret is revealed while her greatest fear comes to life.

New mother and Divinity, Lydia Rayners, is no stranger to heartache and loss. Her father, husband, and brother were taken from her by the demons, and now they want her son. Lydia will never let that happen, and she is determined to bring them down one by one—by herself if necessary. Her plans are going well until a certain sexy deputy discovers that she’s the rumored demon slayer and is hell-bent on stopping her.

Witch and deputy sheriff, Zach Manus, has run from his past for too long and it’s catching up to him now. He’s determined to keep his dark family secret hidden as he fights for control over his emotions and growing powers. His darker side controlled him once before, and he won’t let it happen again. But the closer he gets to Lydia, the more the darkness threatens to consume him, just as the gorgeous Divinity consumes his thoughts and threatens his resolve.

Zach is powerless to resist her, and while Lydia may understand him like no other, trusting her might unleash a new dark power that could destroy them both and put everyone they love in danger in the process.

The two demons suspiciously lurking around the front of the hospital were up to no good. Lydia was sure of it. That was why she followed them—at a reasonable distance, of course—along the streets on the south bank of the St. Johns River.

Revenge coiled inside her, creating an angry ball of power waiting to be unleashed on the demons. They would not get away with destroying everything she loved. Or hurting any innocents in their paths.

Concern for the humans was the only thing holding her back. Her Divine power may be to heal, but pain from the loss of her family fueled the dark side of her power. The side she hid and had sworn to never use. Well, never use on an innocent. Demons were far from saints.

The hellspawns stopped suddenly. The one on the left, the taller one with shoulder-length blond hair, turned his head to peer behind them as if sensing something. Her. Lydia pressed her back into the cold brick wall and tried to slow her breathing and heart rate.

Warmth grew inside her and spread out to her palms. She kept her hands fisted by her sides, not wanting the demons to see the glow of the fire she’d called just in case the bastards decided to get stupid. She also didn’t want them to see through the shadow spell she’d cast to conceal her presence from them.

After a few moments, one of the demons turned back around, shook his head, and both demons continued walking again. Lydia pulled the fire back a little and waited until the creep brothers rounded the next corner before following again.

There were too many humans around for Lydia to make her move. Even at midnight, downtown Jacksonville was hopping with humans enjoying the cooling fall night air and the array of festivities going on around the Riverwalk.

Pushing off the wall, she moved past a small group of humans and stalked after the demons. As she’d suspected, they headed in the direction of the warehouse their not-so-mighty leader, Demetrius Grayson, used as a cover for his demonic operations.

A few blocks farther, and the hairs on the back of her neck rose as a dark, oil-like residue hung in the air. A low growl from behind her told her it was another demon.

She whirled around and thrust her hand out, releasing the fire she’d called earlier. A softball-size fireball hit the demon in the chest. He managed to let out a scream before the flames spread over his body, and he poofed into a pile of ash on the ground.

She turned at the same time one of the other demons crashed into her, sending both of them flying into the brick wall. Pain ripped through her back and head. Reaching out, she placed a palm on the demon’s chest over his heart and called her healer’s gift. The gift she’d been born with and had been able to fully use by the time she was five. Even though her Divine gift was to magically heal, she could also reverse the healing process. In this case, she used it to stop the demon’s heart from beating.

The demon’s eyes widened when he realized what she was doing. He jerked and rolled out of her reach, but the damage was already done. She’d slowed his heart, and the blood flow through his body so much he couldn’t move fast enough. Smiling, she flipped to her back and grabbed his ankle. It was enough contact for her to stop his heart altogether. He fell to the ground with a thud.

The silence of the night caught her off guard. She peered around at the empty alley. “Fuckin’ chickenshit.”

The third demon was nowhere to be seen.

And he’d seen her face.

More books from The Divinities In 2008, Lia Davis ventured into the world of writing and publishing and never looked back. She has published more than twenty books, including the bestselling A Tiger’s Claim, book one in her fan favorite Ashwood Falls series. Her novels feature compassionate yet strong alpha heroes who know how to please their women and her leading ladies are each strong in their own way. No matter what obstacle she throws at them, they come out better in the end.

While writing was initially a way escape from real world drama, Lia now makes her living creating worlds filled with magic, mystery, romance, and adventure so that others can leave real life behind for a few hours at a time.

Lia’s favorite things are spending time with family, traveling, reading, writing, chocolate, coffee, nature and hanging out with her kitties. She and her family live in Northeast Florida battling hurricanes and very humid summers, but it’s her home and she loves it! Sign up for her newsletter, become a member of her fan club, and follow her on Twitter @NovelsByLia.

Follow the tour and enter to #win a $50 Amazon Gift Card!