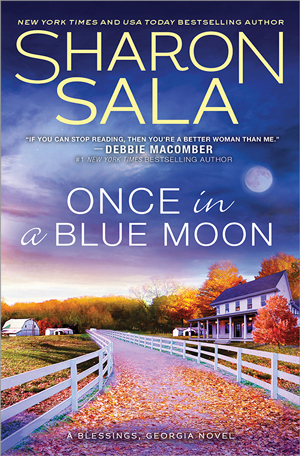 Cathy Terry is tired of running. Full of fear and hope, she backpacked across the country to Blessings, Georgia, not knowing if or when her abusive ex-husband would catch up to her. In Blessings she glimpses a safe haven and the closest feeling to home she’s had in a long time—even more so when she meets Duke Talbot. The sweet, strong, and handsome rancher provides a shoulder to lean on. The stakes get higher as the community embraces her and her relationship with Duke deepens—but can Cathy claim a new home and family before her past claims her?

Don’t miss our review of Sharon Sala’s ONCE IN A BLUE MOON either. Jo gives it a 5 Heart Recomended Read! Read review here.

Once in a Blue Moon

How often do you find a love like this?

Cathy Terry is tired of running. Full of fear and hope, she backpacked across the country to Blessings, Georgia, not knowing if or when her abusive ex-husband would catch up to her. In Blessings she glimpses a safe haven and the closest feeling to home she’s had in a long time—even more so when she meets Duke Talbot. The sweet, strong, and handsome rancher provides a shoulder to lean on. The stakes get higher as the community embraces her and her relationship with Duke deepens—but can Cathy claim a new home and family before her past claims her?

Duke loved this time of year. The leaves on the trees were as varied and colorful as the old patchwork quilts they’d slept under as children. And the sky today was a clear, cloudless blue—the same color as Cathy’s eyes.

The cows saw him driving across the pasture and looked up, hoping to see he was slowing down, which meant they would get fed. But when he kept driving, some moved beneath a small stand of shade trees, while others moved to the feeders with the big, round bales.

Duke had put up the cameras within a couple of hundred yards’ radius and facing the direction where the rustlers had come in before.

He walked a few yards into the trees to pick up the first cam and took it down. Out of curiosity, he stopped and rewound it to watch some of the footage and grinned at the view he’d caught of the backside of a boar raccoon waddling through the woods. He fast-forwarded through the minutes with nothing, then watched the footage of two black squirrels foraging on the ground.

There was more to be seen, but he could watch it at home if he wanted, so he packed it up, then started walking through the trees to the next location, where he retrieved the cam and put it in his backpack before moving on to the last.

As Duke approached the tree where he’d mounted it, he noticed a lot of paw prints in the area. They were from either dogs or coyotes, and if there was a pack of dogs running in the area, he wanted to play the tape back to see.

He was all the way on yesterday’s footage before he saw the coyote, and then it turned to face the camera. Duke gasped, watching as the coyote started staggering toward the camera, its head down, swinging slightly from side to side and foaming at the mouth. At that point he groaned, then stopped the camera.

The hair stood up on the back of his neck as he looked around at where he was standing. He’d only seen an animal with rabies maybe twice in his life, but the coyote he caught on the trail cam exhibited all of the symptoms.

They had to find it and put it down before it spread the disease to other animals. Something like that could easily become an epidemic. He needed to get home and call the county wildlife department and then notify the neighbors.

Duke drove home as fast as he could, then ran into the house carrying the cameras. He dumped them on the kitchen table and headed for the office. He had a friend who used to work for the county wildlife department and would know what to do and who to call.

He sat down without bothering to take off his jacket, found the number on an old business card, and made the call, then waited for someone to answer. This was the last number he’d had for Will, and he hoped it was still good.

And then the call was answered.

“Wildlife Animal Control, this is Carol.”

“Yes, ma’am. I’m trying to locate a ranger by the name of Will Polson. Does he still work there?”

Duke was put on hold, giving him time to put his cell phone on speaker. And then he heard a familiar voice and smiled.

“Well, hello, Duke Talbot! How the heck are you? Are you still out on the family farm?”

“Hi, Will. We’re doing good here, and yes, I’m still here. Listen, we have a problem out here. We had some trouble with cattle rustlers on the farm, so I put up some trail cams in the area, hoping if they came back I’d catch them. But they recently got themselves arrested. Today I went to take down the cameras and had quite a shock when I saw what was on the last one. It was a very obviously rabid coyote, and the last thing we need to have happen is to let this disease spread. There are a lot of farms around here, and people with kids and pets who roam the hills and creeks, not to mention the other wildlife that could get infected.”

“Oh man, this isn’t good. We haven’t had to deal with a rabies case in months,” Will said. “What were the date and time when you caught it on film?”

“Yesterday about this time of day,” Duke said.

“There’s no telling where it is by now, but I’ll get a crew together and head your way. You might notify as many neighbors as you can about the problem. Tell them to keep their dogs up until we find it. You said you’re still on the family farm?”

“Yes. Do you need an address?”

“Nope. I still remember how to get there. Can we drive up to the area?” he asked.

“Yes. To a point, and then the trees will be too dense. It will all be on foot from there.”

SHARON SALA has over one hundred books in print and has published in five different genres. She is an eight-time RITA finalist, five-time Career Achievement winner from RT Book Reviews, and five-time winner of the National Reader’s Choice Award. Writing changed her life, her world, and her fate. She lives in Norman, Oklahoma.